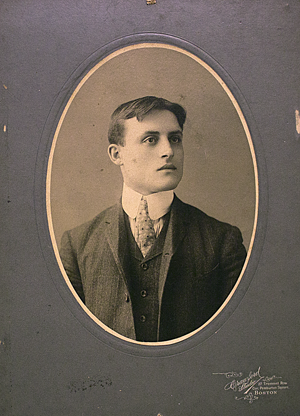 Wife: Nellie Elizabeth Porter born January 14, 1878 at Centerville, N.S.
Died: January 29, 1943 at Acton, Ma. - breast cancer
Notes:
She was the daughter of Randel Wilson Porter and Annie Bradshaw (Annie Bradshaw Porter died when daughter Nellie was about ten years old). Nellie's family moved to the United States and made their residence in Massachusetts at Cochicuate. Nellie Porter had three sisters: Flora Porter - died at age 11 or 12 of pneumonia or TB Amanda Porter Married Edward --------, a shoemaker. They lived in Avon, Mass. They had three children: Ruby Earl Edward Jr. Mariah (Rye) Porter married Jim Locker (lo-ker), and had a daughter Lena Locker before the marriage was annulled. Lena married a man named Kimball from So. Acton. Lena (Locker) Kimball had two children: Carolyn Kimball - died at age 3-4 June Kimball - married Jack McCarthy Jack worked in a paper mill in VT. And fell to death in an elevator accident there. He had pushed a wheelbarrow up to an elevator and when the doors opened he pushed it into the empty shaft and was dragged down with it into the shaft. He died shortly thereafter. They had a daughter named Jill.